Proactive protection against worms in dogs

None of us like to think that our pets are carrying worms. However they’re widespread and infection rates are high. Almost all dogs (and cats) will be infected with worms at some point during their lives. Symptoms of worms in dogs include diarrhea, weight loss and vomiting. Worms can also cause ill health in humans, and the only way to keep them at bay long-term is with regular protection.

Vets recommend regular worming treatment for all dogs every three months, alongside a regular dog flea treatment. Puppies younger than six months old, pregnant or lactating bitches, as well as hunters and those on a raw meat diet are higher risk and may therefore need more regular treatments.

For worms in dogs, we use Drontal which kills every type of intestinal worm commonly found in the UK. And our regular delivery service means you’ll never forget to protect your pet.

Want to know more about worms in dogs? Read our FAQs below.

Your dog is susceptible to fleas and ticks too

Fleas and ticks are two more parasites you need to proactively protect against. Find out more about them below, plus the quality treatment products available through our easy subscription service. 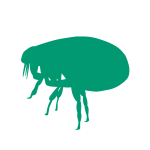 Learn More About Fleas On Dogs 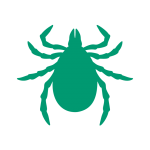 Learn More About Ticks On Dogs 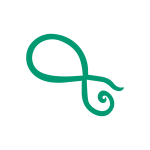 A tapeworm can grow up to 16ft inside your dog and you wouldn’t necessarily know they’re there! Find out more about worms in dogs in our FAQs.

How long does it take for worms to leave a dog?

The time it takes for worms to leave a dog can vary and will depend on the number of worms present and the individual dog. Some worms die quickly whereas others may take a few days to die after treatment. The pet may pass out dead worms-this is completely normal and nothing to worry about. Sometimes the worms may show some slight movement, such as a flicking motion, but they will go on to die. Puppies and adult dogs with very high numbers of worms may even vomit up worms.

How do dogs get worms?

When we think of worms we often imagine long thin tapeworms, however most adult worms are rarely seen. It is therefore not possible to know if your pet has worms just by looking at them and their faeces. Detection requires microscopic examination of faeces for worm eggs. For this reason the use of regular preventative treatment is strongly recommended.

What are the signs of a dog having worms?

Subscribe now to receive worming treatment to your door

Drontal kills every type of intestinal worm commonly found in the UK. Subscribe now and receive regular protection against worms for your dog. Simply answer a few questions and we’ll prescribe the correct dose and deliver it to your door when it’s time to dose.